By
John Ahlin
with
Jean Tafler 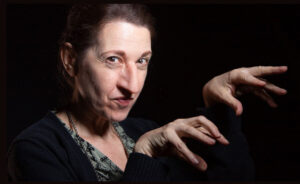 After stops at Snowlion Rep in Freeport, ME and Hubbard Hall in Cambridge, NY, John Ahlin’s “My Witch: The Margaret Hamilton Stories” makes the third and final stop on its rolling world premiere tour at Bridge Street Theatre in Catskill December 3-12, 2021.

This fun, haunting, and delightful solo show, directed by Al D’Andrea and starring the playwright’s wife Jean Tafler (for whom he wrote it), invites audiences on a mysterious Halloween weekend visit to Hamilton’s secluded home on Cape Island in Maine. Just how did a gentle kindergarten teacher from Cleveland wind up scaring the living daylights out of every last one of us as “The Wicked Witch of the West”? And just how much heart, courage, and brains did it take her to become one of America’s most beloved character actresses? If you love “The Wizard of Oz”, if you love all things Hollywood, and especially if you love the theater, this show is a valentine to all three, but it’s also a loving tribute to the real woman behind the cackle.

“We opened our abbreviated 2021 Season this year with Fred Barton’s hilarious one-man revue “Miss Gulch Returns!”, a satiric musical take on the iconic screen villainess that Margaret Hamilton embodied onscreen in 1939,” says John Sowle, Artistic Director of Bridge Street Theatre. “That show just received a Berkshire Theatre Critics Association Award for ‘Outstanding Solo Performance’. So it seems only fitting that we should now be bringing our season to a close by taking a much closer look at the actual woman behind the role that gave us all nightmares as kids.”

“My Witch” has been rapturously received by sold-out crowds on the first two stops of its rolling world premiere tour. Jeffrey Borak of the Berkshire Eagle called it “smart, sly, wickedly clever, richly subtle, robustly theatrical, sublimely warm, and richly satisfying.” J. Peter Bergman of Berkshire Bright focus said that, while it’s rare for him to fall in love with a one-woman play, “Jean Tafler strikes just the right note from the moment of her entrance.” And the Hamptons Theatre Review raved “My Witch is everything great theater can be and then even more. Thrilling, entertaining and interesting … A must see if you love the movie ‘The Wizard of Oz,’ but it’s also a must see because Jean Tafler gives a brilliant, strong, Tony Award-worthy caliber performance effortlessly displaying her talent, skills and gifts as an actor.”