In this time of crisis, what to do? Pull out some archival videos of shows that the founders of Bridge Street Theatre have done over the past 30+ years that we can legally post. We’ve been putting them on line as we can. Here’s what we have so far. Check back often for more.

DO LET US GO AWAY. A PLAY

This 1998 production, presented at the EXIT Theatre in San Francisico, was part of a double bill of works by Gertrude Stein.  The video includes English Subtitles.

A director’s note:  The play was written in 1916 during World War I when Gertrude and Alice had escaped Paris for Mallorca. The subtitles contain the complete text of the “play.” There are no other references to characters or stage directions. The casting was inspired simply by the fact that I had a lot of good women audition, and few men. So I decided to cast all women in the speaking roles, and since Stein’s “plays” are really all about her anyway, dress them all as Gertrude Stein.

X: THE RISE & FALL OF AN ASYLUM STAR

“Step right up and prepare to be amazed as Augustine, the mysterious Mademoiselle X, performs her hysterical seizures for your edification and entertainment. Salpetriere Asylum. Twice Weekly. It’s quite the thing.”

In 2002 at the Phoenix Theater in San Francisco Kaliyuga Arts presented an evening of two solo performances called HYSTERICS. First up was Dan Carbone’s UP FROM THE GROUND (which we brought to BST in 2015), followed by X: THE RISE & FALL OF AN ASYLUM STAR, written by Jill Dowse. We had seen Jill perform it at the Montreal Fringe Festival when Steven was doing BEAUTY there, and we loved the show so much we decided that we needed to present it ourselves. Jennifer Taggart received a 2002 Bay Area Theatre Critics’ Circle Award Nomination for her performance in our production.

Suicide? Murder? Assassination? In 1978, Oakley Hall III, Artistic Director of Greene County’s now-legendary Lexington Conservatory Theatre, completed a play called GRINDER’S STAND about the mysterious circumstances surrounding the death of Meriwether Lewis (of the Lewis & Clark expedition) on the Natchez Trace in Tennessee. That same year, under mysterious circumstances, Hall himself fell from a bridge spanning Schoharie Creek and sustained massive head trauma from which he never fully recovered. His play premiered in Lexington the following summer to wild acclaim. We were sure we had to do this play as soon as we had a space available to present it. This production was presented in our “Raw Space” in 2015 before the theatre was completed. This video contains archival video of excerpts from that production.

AN IMPERSONATION OF ANGELS OR THE ENIGMA OF DESIRE

This is a rare and rough archival video of the world premiere of AN IMPERSONATION OF ANGELS OR THE ENIGMA OF DESIRE, the last show Kaliyuga Arts produced in San Francisco in 2004. It’s a surreal distillation of the life of Salvador Dali.  It was written by our favorite collaborator Dan Carbone, and featured Dan and Steven playing the old and young Salvador Dali. Magician Christian Cagigal (whom you may remember for several performances at BST) plays Garcia Lorca.

There is more information HERE.  Click below to play.

The year after Steven did BEAUTY at the San Francisco Fringe, John decided he needed to do his own one-person show for the Fringe. The result was HORRIPILATION! The word means the experience of your hair standing on end as a result of excitement. It’s a state that the Natyashastra, an Indian manual for actors created in 600 BC, expects performers to create on cue. It’s also one of the most desired responses of the audience to a performance.

John studied theatre in India in 1973 for his PhD dissertation, and this performance is a distillation of his experiences there. If you’ve been to our lobby, the headdress behind the box office was created for this show. It was performed in San Francisco and San Rafael, and then revived for the Times Square International Theatre Festival in 2012.

This video contains highlights from the hour-long performance.

Steven created this homage to Jean Genet for the San Francisco Fringe Festival in 1994. It won Best of Fringe and went on to tour all over the US and Canada. It was called “a gay cult classic” by American Theatre Magazine, won the Drama-Logue Award, a Bay Area Theater Critics Circle Award Nomination, and a Cable Car Award Nomination for Outstanding Individual Performance.

There is more information and excepts from reviews it received HERE.

This performance was primarily recorded in 1998 at The Theatre Off Park, New York City.

WARNING. This is definitely for MATURE AUDIENCES only.
There are graphic sexual simulations and nudity.

KINGDOM OF NOT, written and performed by the inimitable Dan Carbone, was first presented at the San Francisco Fringe Festival where it won a Best of Fringe award. As Kaliyuga Arts, we brought it to New York City for performances at the famous Cherry Lane Theatre in 2006. Dan was nominated for a Independent Theatre Solo Award for his performance. It’s a brilliant, off-the-wall piece described as follows:

During “bad times in a hard place that’s getting harder” Anita Humm, a wary, outcast young woman, finds herself the guardian of an odd, preternaturally wise baby boy.  Together, they take refuge from the rest of the world in Anita’s crumbling old house at the edge of Turkey Bluff, where a whole universe of mysterious wonders (and dark secrets) is waiting to be revealed.

In honor of the 456th birthday of  William Shakespeare we offered archival video of Roxanne Fay’s premiere production of her take on the real Lady MacBeth, THRICE TO MINE, very successfully presented last year at BST.  Scroll down for the link.

IN CIRCLES is a musical by Al Carmines, who was one of the primary founders of the Off-Off-Broadway movement in the 60’s and 70’s. It is based almost word-for-word on a late “play” by Gertrude Stein called “A Circular Play.” However the script doesn’t look anything like a play – there are no character names, no stage directions, and certainly no plot. The score does assign characters to dialog and music, but again there is no indication of what is actually going on. The challenge for a director is to try to make some sense of it. Bottom line for me is simply that it’s about circles. It celebrates circles of all kinds, but especially circles of friends who connect and challenge and celebrate and support each other through successes and failures, through loves and losses. It seems an especially relevant message for these times. Gertrude Stein was a great friend to a great many people, and her spirit, buoyed by Al Carmines’ amazing music, comes shining through every moment.

The play was originally presented at Judson Memorial Church, off Washington Square Park, in 1967. It moved Off-Broadway where it played for a year. I saw it first at Stanford University Theatre on a tour in 1968. For our New York production we managed to convince Judson Church to allow us to do it again in their meeting hall. We had to completely build the space for it, with the audience seated in the round, of course. The only “set” was a floor painted with an image that combined several of Picasso’s late cubist paintings and some stools. 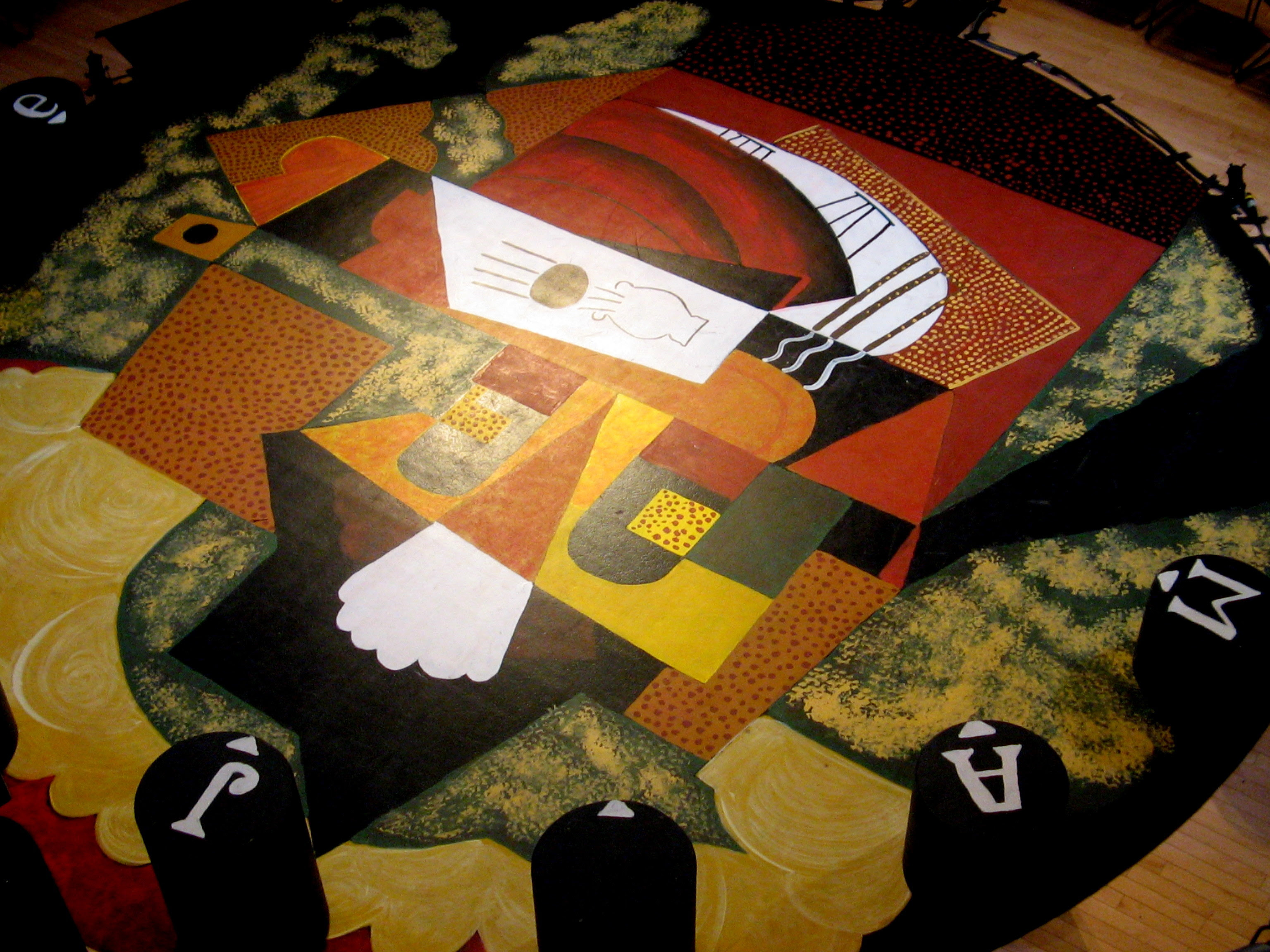 We were so fortunate to have found a fantastic cast who could really sing and play, a great choreographer, brilliant costume and lighting designers, and a dynamite follow spot operator in Michael Temlin.

Do be aware that this is an archival recording, so it’s certainly not TV quality. But hopefully it captures the energy of the production. I’ve added subtitles as the words are mostly unexpected and the space was not ideal for sound recording.