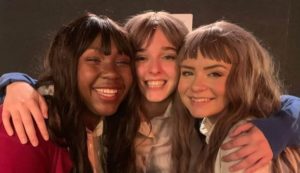 “Bridge Street Theatre took on a beautiful, challenging, full scale musical that is rarely done, and deftly achieved a production that is not to be missed.  It is refreshing to come in to the theater in anticipation of seeing work that is new and unfamiliar to even the most avid musical theater fan. It was rewarding to see how excellently it was executed from a complex and comprehensive range of emotions from the cast, to a talented band, as well as sets, period-appropriate costumes (by Michelle Rogers), and lighting that supported and enhanced the bizarre world of The Shaggs.  What remained with the audience after the production, however, was a satisfying and successful community theater experience.  Director John Sowle used a cast comprised of equity and professional actors (including a cast member who originated a role in a California workshop and the LA world premiere), as well as recent and current students from Catskill High School.” – Tamara Cacchione, Hudson Valley Ovation

“It is increasingly rare that you encounter works of art of singular conception, origin, design and execution. ‘The Shaggs: Philosophy of the World’ could only be grabbing us by the heart in its Capital Region debut at the fabulously idiosyncratic and passionately faithful to their own dictates Bridge Street Theatre, scheduled and created by their co-founders Steven Patterson and John Sowle. Coincidentally, it is a story about glimpsing a vision of what you imagine is capable with art, getting in touch with your true passion, and pursuing it with a relentless focus. “The Shaggs” operates almost as a mission statement in some weird way, so close to what I believe they feel art and their place in the world making it must feel like to them … Bridge Street Theatre has built itself into an essential stop in Capital Region Theatre and this is a great, messy, intimate production of a work that speaks to the heart of every artist in a way that compels laughter, admiration, respect, and love. Their next production is a World Premiere of a play I’ve never heard of, “Better.” I couldn’t be more excited.” Patrick White, Nippertown

“Helen is played by the very lovely Meeghan Darling whose sensitive portrayal of the singer who will not speak is amazing. Her virgin-husband, Kyle, is played by the equally sensitive Magnus Bush whose final scene is very moving. He is also of interest to Betty Wiggin, played with force and a charming guile by Amara Wilson. Sister number three, Dorothy – or Dot – is the practical and sobering girl played with a simplicity that is overwhelming by Alexa Powell … Molly Parker Myers is wonderful in this role, displaying the sensitivity of an abused woman and the fortitude of a loving mother who cannot assert herself into the fray on their behalf … Austin is explored and delineated by actor Steven Patterson, who makes the man so frightening it is hard at times to watch him … Sometimes truth is definitely stranger than fiction and this show goes a long way in proving just that.”  J. Peter Bergman, Berkshire Bright Focus

“An affecting and entertaining experience … Powell, Wilson and Darling, the three young actresses, give depth to their characters as they withstand their father’s onslaught. Meeghan Darling’s Helen is the most complex of the three, silently accepting Austin’s vituperations but secretly creating an independent life. Young Edward Donahue is convincing as Charley Dreyer, the cunning proprietor of Third World Records. Magnus Bush delivers a sympathetic portrayal of Kyle Nelson who is enamored of Helen.” Macey Levin, Berkshire On Stage

And from Social Media

“Not at all what you think a musical like this would be. A surprisingly deeper theatrical experience ... How lucky we are to have such a hip and sophisticated yet approachable generous theatre in our town.” Branden Marlowe

“Once again, BST brings the best to us. ‘The Shaggs’. Jeff and I are going back, at least once. Full of local talent. The cast is truly a gifted one, with some of Catskill High School’s students who are just plain great! If you miss this, as always, you’re missing out on brilliance. Just go!” Betsy Barrett

“Like no musical you’ve ever seen. A terrific little piece of theatre.” Michael Temlin

“Lovely cathartic talented music, acting and staging … Thanks thanks thanks. I’ll spread the word. Hope you’re sold out each night.” Scott Myers