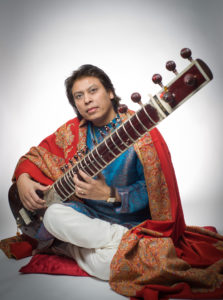 This is a recording of Raag Miya Ki Todi with Sitar and Tabla BOTH performed by Ustad Shafaat Khan. Khan Saheb is the son of the legendary Ustad Imrat Khan and nephew of the one and only Ustad Vilayat Khan.

This recording is part of a series entitled ‘Rhythms of Nature’ produced in collaboration with Dr. Deepak Chopra. The series is of great historical significance in the world of Indian classical music as it represents the first time that a single artist has performed Sitar, Surbahar, and Tabla on the same album at the highest level of mastery. The Ustad has given masterful Tabla accompaniment to his own Sitar performance — the first time this has been done at this level of virtuosity.

Ustad Shafaat Khan, world renowned Indian Classical musician, debuted at the  age of 11 at the King’s Lynn Festival, England opened by Queen Mother. He is the son of Ustad Imrat Khan and nephew of Ustad Vilayat Khan, has performed worldwide at many prestigious concert halls, music festivals and universities all over India, America, Europe, China, Russia and Japan. Recently, he performed with Stevie Wonder at one of the biggest festivals in the USA, The Bonnaroo Festival. In the past, he’s shared a television concert with Ray Charles in Germany. In addition, some of his CDs have been produced by the famous Dr. Deepak Chopra. In the rich history of Indian classical music, Mr. Khan has distinguished himself by being the first known artist to have attained simultaneous excellence in performing Sitar, Surbahar and Tabla.

with Dan Johnson on percussion

“Indian music at it’s top level…Shafaat’s sitar/tablas magic might still be going on, it was barley stoppable” The Shoestring in Pacem, USA

“Driving power entered the performance when Shafaat’s marvelous showed us the rhythmic complexity of the music and enthralled the audience” Cork Examiner, Ireland