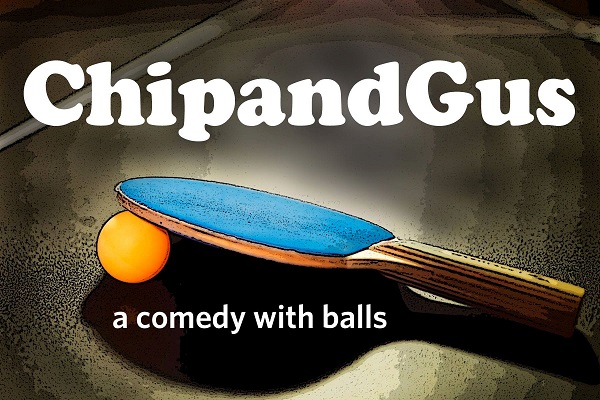 Written and performed by John Ahlin and Christopher Patrick Mullen
Friday May 5 and Saturday May 6 at 7:30pm
Sunday May 7 at 2:00pm

While the electric give-and-take of energy between actors on stage is often referred to as ‘ping pong,’ a new play is taking the idea quite literally. A ping pong table and fast-paced matches are prominently featured in “ChipandGus”, a 90-minute “comedy with balls” by actor-writers John Ahlin and Christopher Patrick Mullen, getting a three-performance run May 5-7 at Catskill’s Bridge Street Theatre.

In this Fat Knight Theatre production, two oddball buddies meet in the back room of a rundown sports bar in Schenectady, NY for their weekly game. But what happens between volleys on this particular funny, sad, surprising night will change their relationship forever. Conceived over a ping pong table and written and rehearsed in basements, attics and garages, this fast, furious, smart comedy was the winner of the Overall Excellence Award for Ensemble in the 2016 NYCFringe Festival, was selected for an extended run in the Fringe Encore Series at Soho Playhouse in NYC, and has been seen in developmental presentations in a variety of spaces, including a black box in New Jersey, a bar in Baltimore, a garage in Pennsylvania, Parkside Lounge in Manhattan, and Proctor’s Theater in Schenectady.

“I remember the exact moment the idea came into my head – and it was at a ping pong table,” says John Ahlin. “I was playing ping pong for fun a few years ago, blowing the rust off my atrophied skills, when somehow, like a young me, I laced a screaming backhand down the edge and in an overly theatrical way I turned to an imaginary crowd and drank in imaginary cheers. And then I stopped, mid faux-celebration and thought, ‘Standing here, at the end of a ping pong table feels very theatrical …. I wonder if this game would work on stage?’ And with that one idle thought, Ahab-like, I began chasing this leviathan of an idea.” 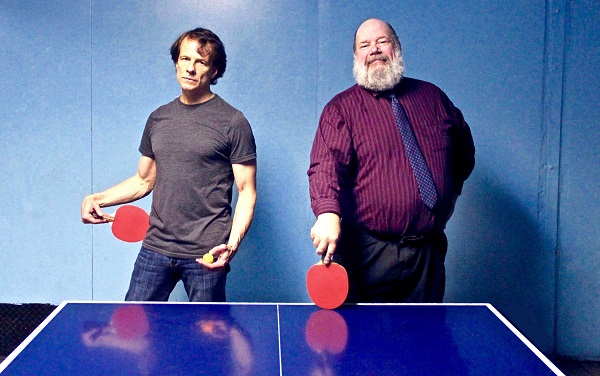 WHAT YOU DON’T KNOW ABOUT WOMEN 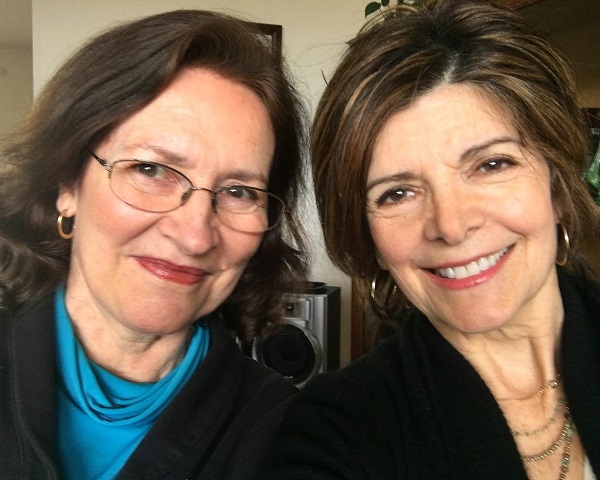 WHAT YOU DON’T KNOW ABOUT WOMEN

Another stellar evening of cabaret entertainment comes to Catskill’s intimate Bridge Street Theatre on Saturday May 13th, when singer/actress Lynn Kearney and former Fosse dancer Sonja Stuart team up with musical director Dan Furman for a night of stories and songs dedicated to wising up the rest of us on just how much we still need to learn about the female sex.

“I’ve always loved that sassy song ‘What You Don’t Know About Women’ from the musical ‘City of Angels’,” Kearney says, “and when Sonja and I decided to do a show together, we wanted to make it an evening of comedy, songs, and patter aiming to explore that theme and the mystery of just what it is that women actually want. We’ve discovered some really funny and touching duets, along with a few solo numbers. And while it’s been difficult to find songs that reflect true friendship between women, I think that’s been our ultimate goal.”

Lynn Kearney got her first big break replacing Sandy Faison as Grace Farrell in the original Broadway production of “Annie”. With her long-time friend and director Rosemary Quinn, she created the play “Ladies Lounge” which had a successful run at Off-Broadway’s legendary La MaMa. On television, Lynn appeared on daytime’s “All My Children” and “The Edge of Night”. She began her cabaret career working at Jan Wallman’s restaurant and then for Sidney Myer at Panache Encore and then Don’t Tell Mama, where she still appears regularly. Sonja Stuart has appeared on Broadway in “Pippin”, “My Fair Lady” and “No, No, Nanette” as well as in regional productions of “Lies and Legends”, “Irma La Douce”, “Company” and “Man of La Mancha”. Her film credits include “All That Jazz”, and “Annie”, and she was nominated for Best Supporting Actress at the London International Film Festival for her work in the indy film “Blue Collar Boys”.

Lynn Kearney began her professional career touring with the Chicago Free Street Theater. In New York, she appeared in “Escape to Freedom”, “Finian’s Rainbow”, and the original cast of the musical “Christy”, before getting her big break – replacing Sandy Faison as Grace Farrell in the original Broadway production of “Annie”.
Lynn and her long-time friend and director Rosemary Quinn also created the play “Ladies Lounge” which had a successful run at Off-Broadway’s legendary La MaMa. On television, Lynn appeared on “All My Children” and “The Edge of Night”.  She began her cabaret career working at Jan Wallman’s restaurant and then for Sidney Myer at Panache Encore and then Don’t Tell Mama, where she still appears regularly. Lynn is a graduate of New York University Tisch School of the Arts and received a Pastry degree from the Culinary Institute of America. She has studied acting with Olympia Dukakis, Alice Spivak and Lloyd Richards, and continues to study singing and acting with Eric Michael Gillett. Lynn currently resides in Catskill, New York.

Sonja Stuart has appeared on Broadway in “Pippin”, “My Fair Lady” and “No, No, Nanette” as well as in regional productions of “Lies and Legends”, “Irma La Douce”, “Company” and “Man of La Mancha”. Her film credits include “All That Jazz”, and “Annie”, and she was nominated for Best Supporting Actress at the London International Film Festival for her work in the indy film “Blue Collar Boys”. She’s thrilled to be appearing in “What You Don’t Know About Women”, both in Catskill and, later in May, at the legendary Don’t Tell Mama in Greenwich Village.

Dan Furman (Musical Director)hails from Old Hickory, Tennessee (just outside of Nashville). He began playing piano and composing music at an early age and went on to study composition and jazz piano at Oberlin Conservatory. After moving to New York in 2003 to play jazz, Dan began writing for music theater as well. He spent 4 years in the BMI Lehman Engels Musical Theater Workshop and his musical, “RIP!” (now called “Impossible But True”), was featured in the 2011 Midtown International Theatre Festival. Dan wrote the theme song for the Big Apple Circus 2010-11 show, “Dance On!” His collaboration with bookwriter Anita Gonzalez, “Ybor City”, was given a staged reading at the Lee Strasberg Institute in Manhattan in the summer of 2015, and later a studio production at the University of Michigan in early 2017. Dan is currently writing book, music and lyrics for “The Proust Virus”, a musical about video game characters who come to life. He lives in Brooklyn and appears frequently as a jazz pianist at the off-off-Broadway show “Sleep No More”, as well as with the Dan Furman Trio.

A reading of the new musical
Coney Island by Frank Cuthbert 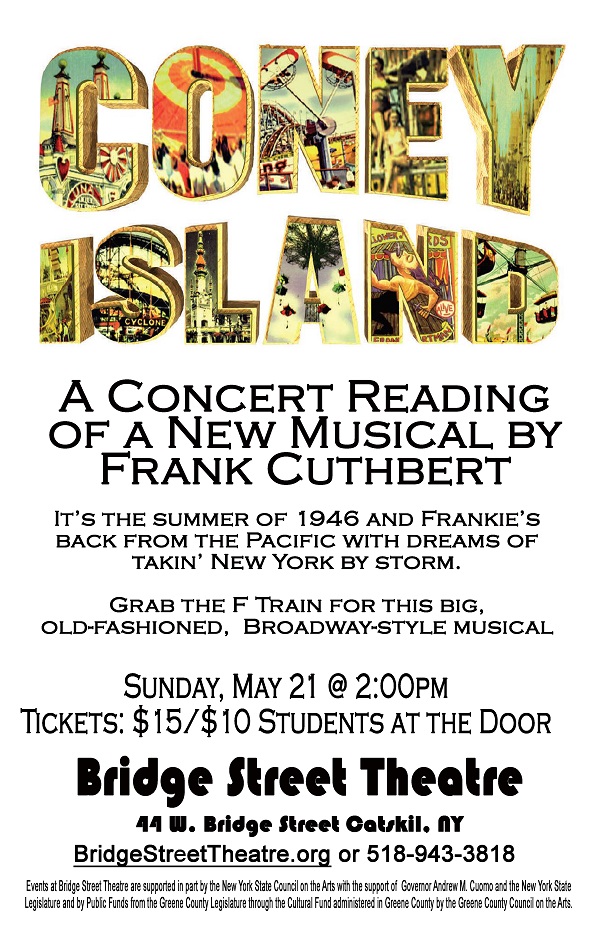 A taste of the great music.
Click here for a couple of songs
We’ve Got Great Kissers In New York
Optimistic You

It’s the summer of 1946 and Frankie’s back from serving in the Pacific with big dreams of takin’ New York City by storm! Hop aboard the F Train for this grand, old-school, Broadway-style musical comedy being presented for one performance only in a concert reading at Catskill’s Bridge Street Theatre on Sunday May 21 at 2:00pm.

Almost a decade in development, Catskill resident Frank Cuthbert’s swingin’ and affectionate tribute to WWII-era NYC is bursting at the seams with all the charm, grit, and promise of Gotham in the postwar years. Amidst the colorful backdrop of the iconic Cyclone roller coaster and Wonder Wheel, the story follows Frankie, a war hero, who has returned to his old neighborhood with dreams of making it as a crooner. Frankie struggles with recurring nightmares of war, his parents’ skepticism about his dreams, and a dangerous rivalry with a mob-connected club owner, who threatens his singing career and is in hot pursuit of his girlfriend Patsy, an aspiring Broadway dancer. Burlesque queens, freaks, hustlers, kooch dancers, entrepreneurs, grifters, small-time (and big-time) hoods – all play a part in the nostalgic tapestry of another time and place that the musical depicts.

“Coney Island” paints an image embedded in our nations’ psyche –  a once uninhabited sliver of sand nine miles from Manhattan, transformed into a legend by ambition and imagination. For most of the twentieth century, Coney Island was a land of rides and exotic curiosities, where ordinary people encountered the extraordinary. Part carnival, part seaside resort, Coney Island was a refuge where people forgot about work and duty and escaped to a world of fantasy and joy. On hot summer days, a million people fled the heat of the city to frolic in the surf and stroll along the Boardwalk. Young and old, rich and poor shared laughter and sunshine by the shore. Cares washed away like footprints in the sand. Everyone entered with a smile and left with a memory. Just a ten-cent ride on the F train. Last stop Coney Island, the greatest amusement park in the world! 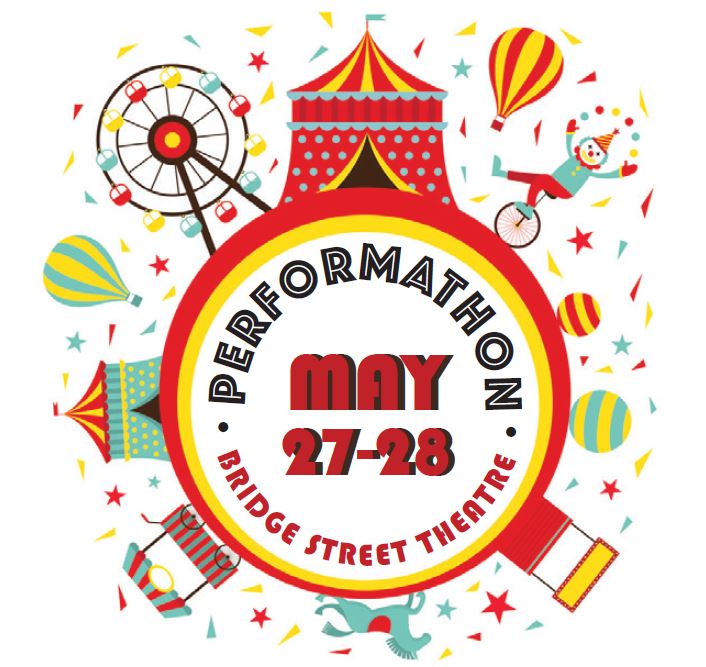 Big Doings This Weekend at our Performathon!
Come see amazing local talent and
help us break a Guinness Book of World Record

Do you (or anyone you know) have a talent you want to share with the world? This Memorial Day weekend, Catskill’s Bridge Street Theatre will give you a chance to strut your stuff, whatever it may be, when they present a Performathon Fundraiser in their beautiful new Mainstage auditorium. Want to haul out that old accordion or maybe see your child perform her magic act on the stage of a professional theatre? Or perhaps you’ll hear your neighbor play ukulele, sponsor your plumber to come and tap dance, or enjoy your friend from work reciting his Shakespeare sonnet or performing that song from Les Mis. Now’s your chance!  The organization’s first-ever Performathon is the culminating event of the theatre’s push to raise $35,000 for its Capital Campaign. All proceeds go toward the Campaign and all donations are tax deductible.

As part of the event, Bridge Street Theatre will also be attempting to break the GUINNESS WORLD RECORDS title TM for Most signatures on a piece of theatre memorabilia. They’ll begin collecting signatures on a big golden cupola (which was removed from the theatre’s roof during its recent renovation) in early May, and the attempt to reach a goal of 700 signatures will culminate at the Memorial Day weekend event. On both days of the event, $1.00 snacks will be available including hot dogs, cupcakes, and more. There will also be raffles and a 50/50, all of it in a family-friendly, county fair atmosphere. Bridge Street Theatre invites EVERYBODY to perform or just to come and enjoy all the incredible talent in our local community.