ore than 80 years ago, it has immediate contemporary urgency and relevance … Under the astute, nuanced direction of John Sowle, who also designed the impressive lighting and evocative set, the two-character, one-act “Leni” moves fluidly through the years, pitting her younger self (Olivia Howell, very strong) against the older (Roxanne Fay, profoundly compelling).”  Steve Barnes, Times Union Click here for the complete review

“A dynamic realization of Riefenstahl lost within her own special world … The playwright’s concept is a delicate matter which, in the production directed by John Sowle at Bridge Street Theatre in Catskill, NY, works brilliantly. This is a thought-provoking, intriguing work with excellent talent on hand to bring it to life. The chance to see it should be embraced by anyone who loves good theater.”  J. Peter Bergman, Berkshire Bright Focus Click here for the complete review

“There’s nothing about this production that isn’t top-notch … John Sowle’s directorial eye is keen and not a detail is left to chance. The women are perfectly cast. This is the third time I’ve had a chance to see [Roxanne] Fay’s work and she continues to amaze me; what a powerfully talented actress. [Olivia] Howell more than holds her own, and the two of them together bring such dignity and truth to the stage. Michelle Rogers’ costumes are also spot on – both women look perfect for their time period and the costumes themselves are a visual treat … What a thought-provoking show, and how timely in the Woody Allen/Harvey Weinstein/Roman Polanski era. Our summer theater season is kicking off with a bang.”  Amy Durant, The Alt Click here for the complete review.

“The play asks important questions that resonate today … Roxanne Fay gives another strong, nuanced performance here … this actress is in command of her character and takes us with her every step of the way.  As her counterpart, Howell is especially effective in the interrogation scenes, beautifully directed and acted with mounting clashes between the women, gradually shifting the balance of power as Howell begins to direct the filming.” – Barbara Waldinger, Berkshire On Stage

What happens to artists when they allow themselves – knowingly or unknowingly – to become cogs in a propaganda machine? This and other fascinating and complex moral and ethical issues are explored in the second production in Bridge Street Theatre’s five-play 2018 Subscription Series – Sarah Greenman’s “Leni”. Using the life of Hitler’s chosen filmmaker Leni Riefenstahl as a springboard, this is a searing examination of narcissism, denial, and artistic responsibility.

In a limbo resembling a semi-abandoned soundstage, Helene (the aged Leni Riefenstahl) hovers in a dream somewhere between life and death. There, she encounters Leni (her youthful self) and is forced to confront the moral implications of the works she created and the ways in which those works helped to empower a fascist regime. Was she complicit or merely an artist attempting to create the finest films of which she was capable, blinding herself to their implications and to the evils of the party that engineered their creation? Together, the two Lenis (who are really one) attempt to create one final film that will justify both their work and their life. To what extent are we responsible for decisions we make as younger people without the knowledge of hindsight? And to what extent does the world have the right to pass judgement on us for those decisions? “Leni” asks these questions in a stimulating, entertaining, and thought-provoking fashion, certain to inspire hours of discussion and debate.

As with another morally-conflicted film auteur, D.W. Griffith (“Birth of a Nation), Riefenstahl’s genius as a filmmaker has rarely been questioned, even by critics who despise the ideology to which she lent it. Pauline Kael, film critic for The New Yorker, called “Triumph of the Will” and “Olympia” the two greatest films ever directed by a woman. Her contribution to the art form is undeniable, as are the technical innovations she introduced. Yet equally notable is her contribution to ‘greasing the wheels’ for the ascension of the Nazi Party. She is definitely a character against whom outright ‘black or white’ judgement is not easy and Sarah Greenman’s play portrays her ‘warts and all’, letting audiences to draw their own conclusions.

Bridge Street Theatre Dramaturg Steven Patterson will be presenting a pre-show talk before each performance to put the life of this amazing women in context for you. Come one-half hour early for the presentation. Admission is free with your ticket.

Bridge Street Theatre especially thanks Jay Lesenger for his generous underwriting support of this production.

Click here for the Press Release and Publicity Photos

(Helene) is an actor, playwright, and Producing Artistic Director of Circle In The Water, LLC, and is thrilled to return to Bridge Street Theatre for Leni. She was last seen on stage at Jobsite Theater in Tampa, FL as Prospero in The Tempest and as Paige in Taylor Mac’s HIR. Here at Bridge Street, she has played Beatrice in The Effect of Gamma Rays on Man-In-The-Moon Marigolds, as well as performing her own original works My Unspeakable Confessions: Gala Dali Declines to Explain Herself, Upon This Rock: The Magdalene Speaks, Dream Child: The Trial of Alice in Wonderland, and Home Fires Burning. Other roles have included Ruth in Collected Stories, Beatrice in Much Ado About Nothing, Feste in Twelfth Night, Touchstone in As You Like It, Dr. Emma Brookner in The Normal Heart, Terry in Side Man, Fraulein Schneider in Cabaret, and Nurse Ratched in One Flew Over The Cuckoo’s Nest. As a playwright, Roxanne has been awarded the 2018 Artist-in-Residence by The Growlery in San Francisco, the 2017 Creative Pinellas Individual Artist Fellowship, and the 2016 Hawthornden Writers’ Fellowship (artist in residence, Hawthornden Castle, Scotland). Her plays have been produced in Florida, in Chicago, at the United Solo Festival in NYC, and here in beautiful Catskill. Her latest play, Fabrication, was a commission for the Salvador Dali Museum in St. Petersburg, Florida, created to highlight the museum’s exhibition on the work of surrealist fashion designer, Elsa Schiaparelli and premiered in November of 2017. www.roxannefay.com www.circleinthewater.com. 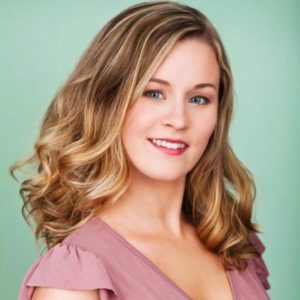 OLIVIA HOWELL (Leni).  This is Olivia’s Bridge Street Theatre debut, and she couldn’t be more thrilled to be sharing the stage with her friend Roxy and tackling the complex character of Leni. Past select credits include Sunny in The Last Night of Ballyhoo, Honey in Who’s Afraid of Virginia Woolf, and Gladys in Skin of Our Teeth. Olivia’s recent film Nothing Like the Sun just won Best Feature at the LA Film Festival. She also does voice-over work with the popular children’s series Mother Goose Club. Love to her family, the cast and crew, and her soon to be hubby, Greyson. Thanks for watching Leni. We must know our history to shape our future.

SARAH GREENMAN (Playwright) is a painter, playwright, actor, and advocate for women in the arts. She is also the Creative Director for Statera Foundation, a nonprofit dedicated to positive action for gender parity in the theatre. Sarah’s plays have been produced all over the country. Regional acting credits include the Utah Shakespeare Festival, Stolen Shakespeare Co., Strawberry Theater Workshop, Insight Out Theater Collective, and six seasons at PCPA Theaterfest. She holds a BA in Creative Writing with a Women’s Studies emphasis from Mills College. Sarah is also a graduate of the Pacific Conservatory Theater (PCPA) where she most recently served as interim Director of Outreach and Education. Originally from California, Sarah now resides in Halfway, Oregon with her husband Jack Greenman and their two sons Walker and Charlie. Sarah is a member of the Dramatists Guild of America. More info at sarahgreenman.com and staterafoundation.org.

JOHN SOWLE (Director/Designer) is Artistic and Managing Director of Bridge Street Theatre. He founded Kaliyuga Arts in 1986 with his partner Steven Patterson and has received multiple awards for his directing and design work on their Los Angeles, San Francisco and New York productions. He has directed and designed BST’s productions of Redwood Curtain, How To Pray, The Official Adventures of Kieron and Jade, Frankenstein: The Modern Prometheus, Holiday Memories, The Epic of Gilgamesh, The Killing & The Love Death (late plays of William Inge), and GRINDER’S STAND by Oakley Hall III, and designed their productions of The Tavern, The Effect of Gamma Rays on Man-in-the-Moon Marigolds, and Frankie & Johnny in the Clair de Lune. John has an undergraduate degree in mathematics from M.I.T and a PhD in Dramatic Art from UC Berkeley.

MICHELLE ROGERS (Costumes) began costuming plays while in college and continued working on high school productions throughout her teaching career. She’s designed costumes for Marat/Sade, A Midsummer Night’s Dream, Oliver!, and Pride and Prejudice, among others. Now retired from education, Michelle is delighted to be working with Bridge Street Theatre. She has been the costume designer for The Tavern, Frankenstein, The Effect of Gamma Rays on Man-in-the-Moon Marigolds, How To Pray, Redwood Curtain, and Frankie & Johnny in the Clair de Lune.

CARMEN BORGIA (Sound) is a musician and sound designer. He has designed and mixed films for PBS, HBO, IFC, and many film festivals. He has also released two CDs of his own work, North and The Red Circle Line. In 2009 his musical South premiered at Dixon Place in New York City and had a concert reading at Bridge Street Theatre in 2017. He operates out of studios in Catskill and The Bronx, doing sound-for-picture work and music recording. He can be found at Magpie Bookshop on Saturday afternoons at his Ukulele Camp, where anyone can learn to uke.

* Member of Actors’ Equity Association, the union of professional actors and stage managers in the United States.