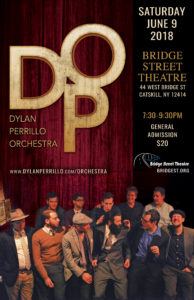 The eleven-piece Dylan Perrillo Orchestra, a collection of musical friends out of Albany, New York makes its first appearance at Bridge Street Theatre.

The group performs music ranging from dance hits of the 1920s-1950s to modern original compositions. Since their formation in 2013, DPO has performed around the northeast for concerts, outdoor festivals, private parties and swing dances, opened for Jay Leno at Proctor’s in Schenectady, and played at Caffe Lena, Albany’s Tulip Festival, SUNY Potsdam, UConn, Saranac Lake’s Party on the Patio, and many other fine places.

Be sure to wear your dancing shoes that night, since the carpeted area between the front row and the stage will be available to patrons who feel the urge to “cut a rug”. 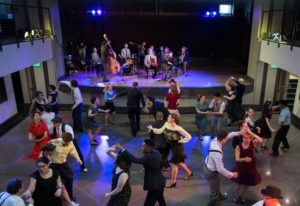