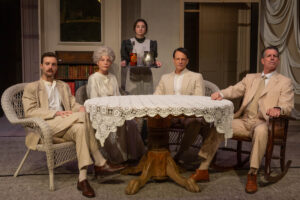 COVID continues to create financial stresses for theaters as a big slice of audiences remain in their homes. As a result, most institutions are keeping their grandest artistic ambitions in check. That’s not the case at the Bridge Street Theatre in Catskill, where company founders John Sowle and Steven Patterson are at work on what they have dubbed the Mount Everest of American drama, Eugene O’Neill’s “Long Day’s Journey into Night.” Their new production of the classic family saga opens on Thursday, Nov. 11 for a run of eight performances.

“All actors who really consider themselves artists want a crack at it,” says Patterson, who will play the patriarch James Tyrone. The balance of the five-member cast includes Bridge Street regulars Roxanne Fay, Christopher Patrick Mullen and Christopher Joel Onken with a company debut by Taylor Congdon as Cathleen. Sowle directs the four-act tragedy, which has a running time of more than three hours.

From alcoholism and addiction to resentment, guilt, and jealousy, every secret of the Tyrone family is laid bare in the play. The plot details are so close to O’Neill’s own life that he stipulated it not be published or performed until 50 years after his death. Nevertheless, it was debuted in 1956 just three years after he died. Quickly recognized as a masterpiece, it won the Tony for best play and the Pulitzer for drama.

“There’s a feeling of invading the lives of these people because it’s so intimate. It takes you to new places of deep catharsis. Afterward, you’re relieved that you survived,” says Patterson.

“We’re having stickers printed up that read ‘I survived Long Day’s Journey Into Night’ to pass out to all attendees who make it through,” adds Sowle. “It’s an epic experience we think is eminently worth taking on, and we’re pulling out all the stops for this production.”

Catskill-based sculptor Marc Swanson is providing an all-white set that will be complimented by Michelle Rogers’s white costumes. According to Sowle, the colorless concept came from the frequent mention of fog in the script. Swanson and his signature white forms, by the way, will soon take on a bigger presence in the region with the March opening of a major installation at Mass MoCA in North Adams, Massachusetts. A companion exhibition will go on view in July at the Thomas Cole National Historic Site, also in Catskill.

“You have to open your veins on stage with this and there’s nowhere to hide especially on this white stage,” says Patterson. “You must be willing and fearless and we’re pretty rung out after each rehearsal.”

Also part of the new production is original incidental music recorded by the composer and jazz artist Justin Morell. Sowle describes the cuts as a theme and eight variations. “There’s the feel of improvisation in the music that beautifully captures the progression of the play and the haziness of the fog stealing in,” he says.

According to Patterson and Sowle, apart from the sheer energy and drive required to mount “Long Day’s Journey,” additional financial expenses came from the need for a longer rehearsal period. Normally at Bridge Street a cast is booked for a four-week commitment consisting of two weeks for rehearsal and two for performances. With the current production, one additional week was added for rehearsing.

Above the theater is a four-bedroom apartment where actors from outside the region are housed. Lodging for performers is required by the union Actor’s Equity Association, which has added specific safety protocols since the arrival of COVID. “Extra protections for actors is a good thing but it causes financial and logistical nightmares,” says Sowle.

During the shutdown period, things were still happening behind the scenes at Bridge Street. Sowle edited and released online an extensive collection of videos made from 30 years of shows by Kaliyuga Arts, the production company that the couple operated in Los Angeles, San Francisco and New York before settling in the Hudson Valley in 2003.

For his part, Patterson recorded new videos of him reading and displaying children’s books. “I have great-grandchildren in living in Oregon and this was one way to stay in touch with them,” he says.

The theater and its upstairs apartment became a place where eight different dance troupes assembled and “bubbled” for two-week residencies during which they could work without fear of outside infection. Among the projects that were created was a pas de deux for two women of the American Ballet Theater choreographed by Adriana Pierce. The liaison to the various dance companies was Duke Dang, a part-time Hudson Valley resident who produces the Works & Process performance series at the Guggenheim Museum in New York.

The Catskill producers also got busy with fundraising with notable successes from government agencies. According to Sowle, Bridge Street has received two grants from the federal program Shuttered Venues totaling $52,000, and an additional grant from a similar program administered by New York state.

Recently the company’s contracted annual subsidy from the New York State Council on the Arts was raised from $15,000 to $25,000.  Prior to the pandemic, the seven-year old company had grown to have an annual budget of roughly $200,000.

Joseph Dalton is a freelance writer based in Troy.