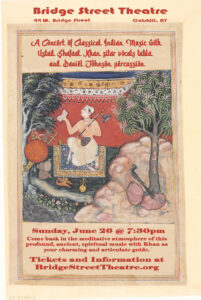 Son of the legendary Ustad Imrat Khan and nephew of Ustad Vilayat Khan, Ustad Shafaat Khan has performed worldwide at many prestigious concert halls, music festivals, and universities in India, America, Europe, China, Russia, and Japan, and shared a stage with Stevie Wonder (at The Bonnaroo Festival) and Ray Charles (on German television). A number of his CDs have been produced by Dr. Deepak Chopra. In the rich history of Indian classical music, Mr. Khan has distinguished himself by being the first known artist to have attained simultaneous excellence performing on the sitar, surbahar, and tabla. This performance marks his fourth appearance at Catskill’s Bridge Street Theatre. To learn more, visit his website: musicalbeats.net.

Local audiences have just a single chance to hear Ustad Shafaat Khan live in concert – Sunday evening June 26 at 7:30pm. Come bask in the meditative atmosphere of this profound, ancient, spiritual music with Khan as your charming and articulate guide.