Posting notices, reviews and production photos here for our world-premiere production of THE LETTERS by David Zellnik 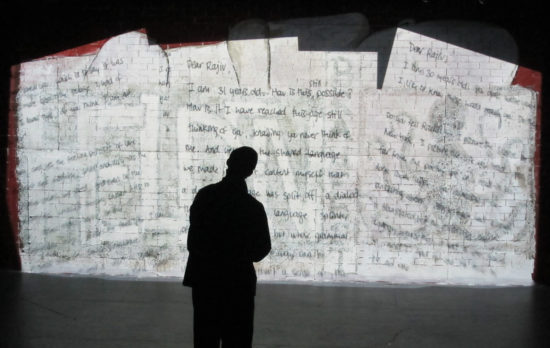 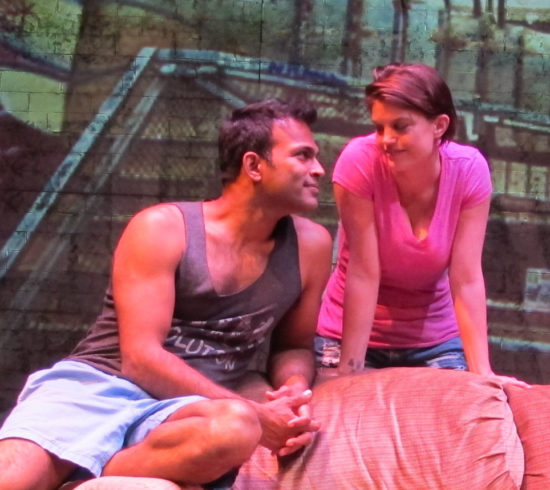 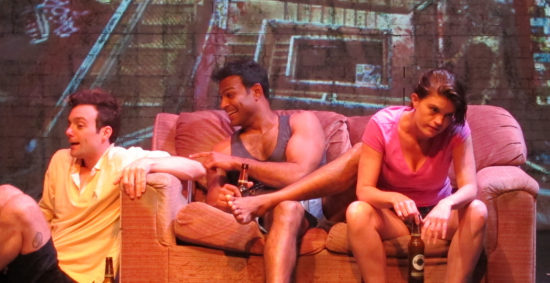 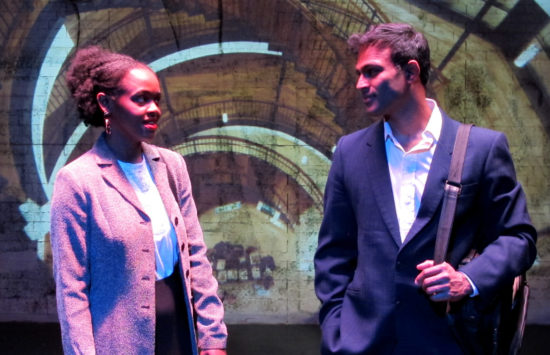 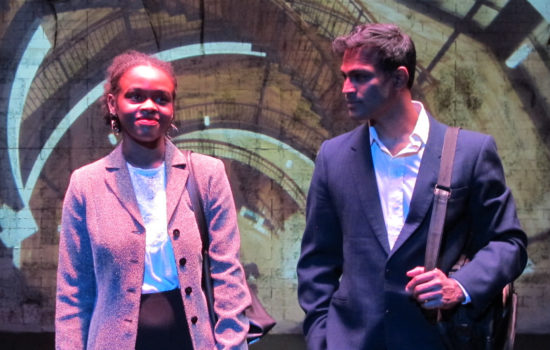 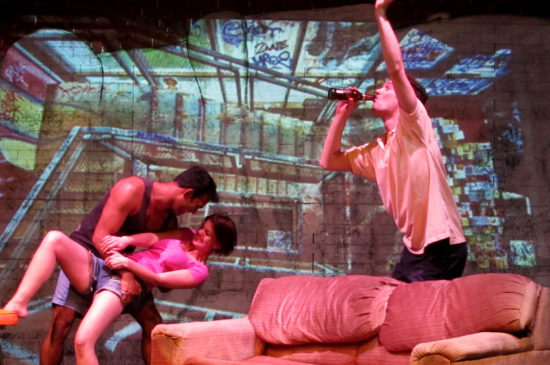 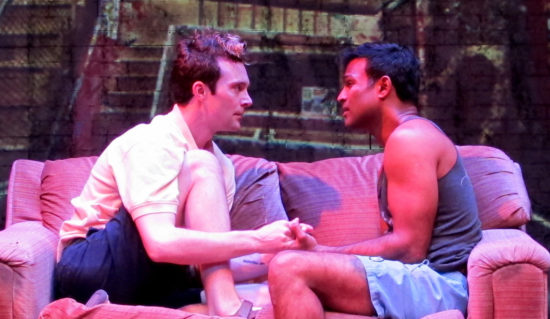 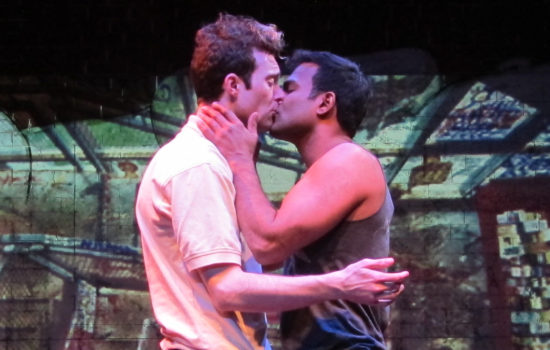 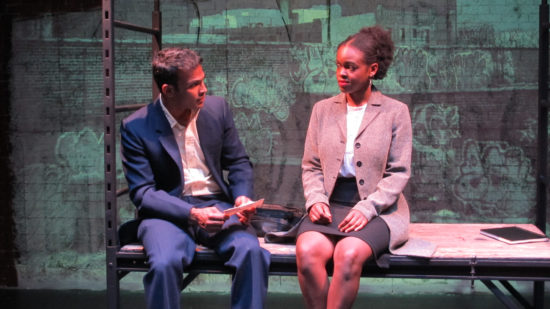 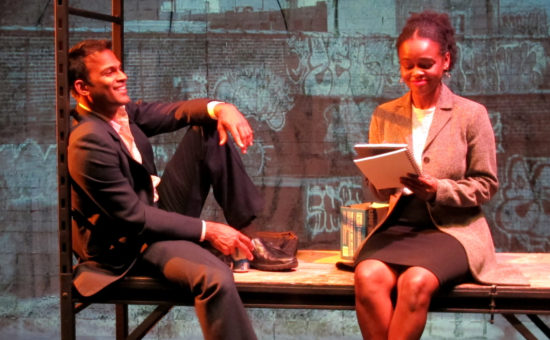 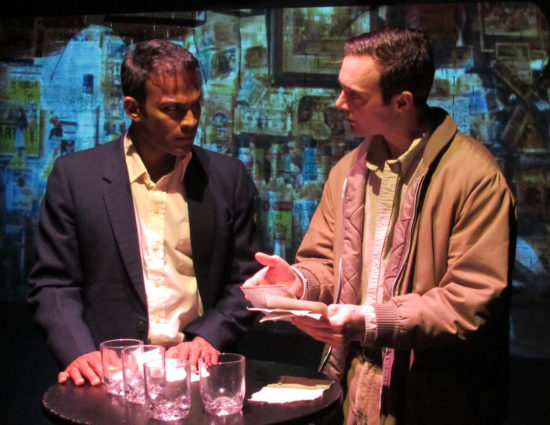 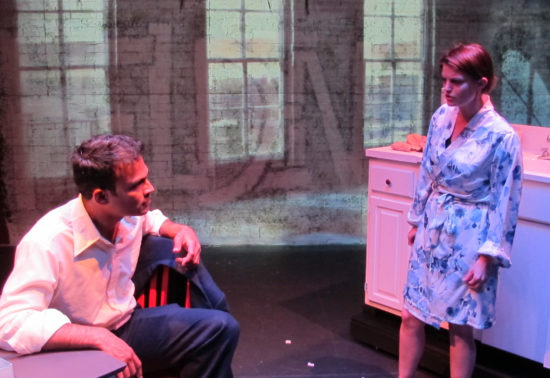 “If you’re anywhere near Bridge Street Theatre in Catskill, NY, take yourself, take a friend, take a lover, and run to see THE LETTERS! A World Premiere by David Zellnik. Beautifully written, acted and directed. Now through May 5 only.” Lee Tannen on Facebook

David Zellnik’s engrossing play “The Letters” is receiving its world premiere at the Bridge Street Theatre in Catskill, New York … The script requires, and receives, fine performances from the four actors. Singer, Onken and Parcesepe realistically age from the devil-may-care twenty-two-year olds in Berlin into the worn and frustrated adults of 2014. Onken in particular morphs from the lithe young man filled with ambition to a broken almost wraith-like variant of himself. Parcesepe’s Rachel is the strongest of the three friends, perhaps knowing more than the others of what she wants. At first, compliant and gregarious she becomes angry and wary of Rajiv. Confidence seems to ooze out of Singer when his Rajiv is young, but later he is the picture of a businessman weary and resentful of the job he wishes to leave. Cofield’s Laura is the softest character and plays her simply and sincerely. It’s a smart performance … The production has been beautifully staged by Bridge Street’s Artistic Director John Sowle who also created the set and light designs. His stage pictures are effectively composed and the pace of the play beats with emotional rhythms. The sets are minimal, keeping the focus on the characters. The actors situate basic props as they play the moment so that the changes are part of the action and, therefore, unobtrusive and efficient. In addition, there are myriad projections depicting various locations and, very dramatically, a torrent of letters Henry and Rajiv have written that inundate the screen … The strength of this gripping production is Zellnik’s script. The conversational and precise dialogue realistically expands the characterizations. Not a word is wasted as he moves his protagonists through time, a range of emotions and conflict. Despite what could be a rambling story line, it is tight and follows an impelling dramatic arc. This is a show in which all the creative elements work together to create a solid and sensitive portrait of four people and a profound emotional experience for its audience. – Macey Levin, Berkshire on Stage

“What is irreplaceable nowadays?’ is the gripping question asked within the first few lines of David Zellnik’s THE LETTERS, and it sets the course for the powerful and emotional world premiere of this work at Bridge Street Theatre in Catskill, NY … A story perfect for our times, specifically singing out to the newly-named Xennial Generation (a micro-generation stuck between GenX and Millenials). Xennials grew up in an analog world but are now living as adults in a digital world, and this provides an intriguing backdrop for the story. Zellnik explores whether our words free us or imprison us, whether love is rare or everywhere around us, and whether we are, or even want to be, smaller and smaller in a big world. The script captures the audience’s attention and will remain in their thoughts long after the show is over … Transitions between 2014 and 2002 effectively shape and move this story in unanticipated directions, keeping the audience enthralled and longing for answers from the first line to the last … ‘What is irreplaceable nowadays?’ There are moments in THE LETTERS which suggest an answer to that incisive question. Performances such as this, which touch the audience in a meaningful way, set in a welcoming, unique, and intimate house, allow us to leave the real world behind and truly participate in an art form. An experience like that? That is irreplaceable.” Teresa Gasparini, Hudson Valley Ovation

“Bridge Street Theatre opens its new season with a fantastic production of a great play tonight at 7:30! It’s the World Premiere of a romantic celebration of love, friendship, sex and art called The Letters. Three friends have the best time exploring Berlin, themselves and life’s pleasures squatting in an abandoned apartment penniless in 2002. Ten years later, the surviving couple need to face what happened to all they hoped for and did to each other so they can move on. It’s inclusive, whip-smart, sexy and piercingly emotional played by a superb young cast expertly directed. We were lucky to catch their pay-what-you will Preview last night. If you love new theater, you should absolutely make the 45 minute trip to Catskill and check out this fantastic gem of a theater John Sowle and Steven Patterson have created. We try and catch everything they do because most of the stuff you see there you won’t find anywhere else. This show is a perfect introduction, it’s another great night in Capital Region theater AND there’s another pay-what-you-will performance this Sunday!!! … It’s an exhilarating discovery, unlike anything you’ve seen recently!” – Patrick White on Facebook

“Played to perfection! … Two friends, former college roommates, are reunited in Berlin at age 22, joined by a girl who makes a world of difference in both their lives. One of the men, Henry, is gay; the other one, Rajiv, is ambivalently bi-sexual. The girl, Rachel, likes them both. That is not the plot, that’s just the setup in this fascinating world premiere presentation of this new play by David Zellnik, an author with seven Drama Desk Award nominations among his other honors. The play covers twenty years in this triple friendship and takes us on a bumpy ride through almost every alteration friendships can endure before beginning to crumble away to dust. – J. Peter Bergman, Berkshire Bright Focus

“Shivantha Singer plays Rajiv, a hard part to pull off but that is something that the actor manages to do. Singer takes a dying soul and gives it sensational life-force … Singer is wonderful in the part, playing almost too convincingly. I really cannot be certain he is acting, there is such a naturalness in his playing, but I hope that the actor is holding the reins here and not the man inside the actor. His work is that good.  – J. Peter Bergman, Berkshire Bright Focus

“Shivantha Singer’s standout performance as Rajiv is invested with pathos, charm, and humor. Singer flawlessly transforms between the carefree 22-year-old Rajiv of 2002, and the regretful, unsatisfied 34-year-old of 2014, typically with mere moments to make the transition. Singer portrays his character’s sense of having a ‘cross to bear’ in such a palpable way the audience carries the weight with him. To achieve this sort of response is the work of a highly committed and engaged actor.” Teresa Gasparini, Hudson Valley Ovation

“Rachel is realized by Sara Parcesepe who gives the girl so much energy that even when she is sitting down the force of her physicality comes across the stage and into the audience with amazing strength. She is a dynamic actress, well suited to a role like this one. – J. Peter Bergman, Berkshire Bright Focus

“Sara Parcesepe’s energetic performance as Rachel adds an interesting complication to the story. Parcesepe bounds on stage with keenness and enthusiasm which she carries through the entire show, infusing the performance with subtle differences in expression as she, like Rajiv, evolves across the span of the two time periods, while questioning her relationship and future with Rajiv.” Teresa Gasparini, Hudson Valley Ovation

“Christopher Joel Onken is wonderful as Henry. His character’s fragility and emotional openness is seen in Onken’s physical portrayal of him and heard in his voice. There isn’t one misstep in his portrait … Played to perfection. – J. Peter Bergman, Berkshire Bright Focus

“Christopher Joel Onken as Henry is a marvel on stage and his performance is unforgettable. Throughout Act I, he comes alive talking about his character’s passion for languages, but for the better part of the Act, Henry acts an observant bystander; watching Rajiv and Rachel’s love story unfold. Even in this passive role, Onken is fully present and engrossed in every moment of the scene and draws the audience to his presence in a way which connects us to Rajiv’s grief at his loss. In Act II, Onken’s performance explodes with a level of authenticity and emotion that leaves the audience in captivated silence, hanging on his every word and action, as we learn the story of Henry’s fate.” Teresa Gasparini, Hudson Valley Ovation

“Laura is played by Alexis Cofield who takes the ‘bit’ of consternation in her teeth and pulls the play along to a different dimension … Cofield’s final scene is one of Zellnik’s best and she does what no one else has an opportunity to do and that is be completely honest for a moment.” – J. Peter Bergman, Berkshire Bright Focus

“Laura is played by the capable Alexis Cofield, who provides a steady anchor to the 2014 Rajiv. Her raw honesty keeps Rajiv ‘in check’, and Cofield is able to do this with a coolness and humor that makes her extremely likable on stage.” Teresa Gasparini, Hudson Valley Ovation

“Nostalgia for college and the years soon after, for their freedoms of possibility and opportunity in life and in love, suffuse the gentle, tender, touching THE LETTERS. Taking place mostly in 2002 and 2014, in Berlin and New York, THE LETTERS brings us into the complicated relationship of a straight woman, a gay man, and the man who loves them both, albeit not in the ways they would like … To be in your early 20s and attractive and smart and talented and in love, even if it’s confusing and painful: That’s a place many want to revisit, and these could be the people we’d enjoy finding there.”  Steve Barnes, Albany Times Union

“Thank you, Bridge Street Theatre, for your beautiful production of THE LETTERS by David Zellnik. You dare to produce new work and it is brave and gorgeous. John Sowle directs and designs, a tour de force.” – Tracy Liz Miller on Facebook