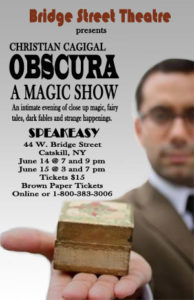 “This interactive one-hour show resembles nothing I have seen in this town in recent memory. Come to think of it, I don’t think I’ve ever seen anything like it.” – Bloody Underrated (Montreal)

“Spellbinding … Bravely entrusts its success into the open-mindedness of its audience and the storytelling talent of its performer, and the results are admirable, breathtaking, and fittingly magic.” – Charlebois Post, Montréal

“Charismatic and engaging … He has us in the palm of his hand.” – The Black and Gold Review, New Orleans

Bridge Street Theatre presented the amazing Christian Cagigal in an intimate evening of close up magic, fairy tales, dark fables and strange happenings called OBSCURA. Christian’s unique blend of theatre and “slightly creepy” magic has played to spellbound audiences and packed houses in San Francisco, Los Angeles, Las Vegas, Chicago, New York City, Montreal, and Bintan (Indonesia). He recently completed a sold-out run of a special edition of OBSCURA in the Close-Up Gallery of the world famous Magic Castle in Hollywood, and this summer he’s headed for Scotland where he’ll be performing the show at the Edinburgh Fringe Festival. You can visit christiancagigal.com for lots more on this astounding actor, magician, and mentalist. You can also view a webseries based on OBSCURA on YouTube, but only live and in person does this show reveal its true wonder and magic.