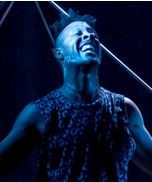 Dark Matter Messages is a collection of live poetry, video projections and music interwoven with improvisational movement meditations that realize AfroFuturism as a means to play within the nowness of impending futures. Moved by how Octavia E. Butler invents interrelated notions of humanness in her Parable Series, Dark Matter Messages dreams Butler’s unfinished manuscript, Parable of the Trickster, into a live performance experience.

D. Sabela Grimes, a 2014 United States Artists Rockefeller Fellow, is a choreographer, writer, composer and educator whose interdisciplinary performance work and pedagogical approach reveal a vested interest in the physical and meta-physical efficacies of Afro-Diasporic cultural practices. Described by the Los Angeles Times as “the Los Angeles dance world’s best-kept secret” and as “one of a mere handful of artists who make up the vanguard of hip-hop fusion,” Grimes is considered one of the most imaginative and innovative artists in his field. His AfroFuturistic dance theater projects like World War WhatEver, 40 Acres & A Microchip, BulletProof Deli, and ELECTROGYNOUS, consider invisibilized histories and grapple with constructed notions of masculinity and manhood while conceiving a womynist consciousness. He created and continues to cultivate a movement system called Funkamentals that focuses on the methodical dance training and community building elements evident in Black vernacular and Street dance forms. Previously, Grimes co-authored and performed as a principal dancer in Rennie Harris Puremovement’s award-winning Rome & Jewels. He received a BA in English and MFA in dance and choreography from the University of California, Los Angeles.