“To tell you the truth, I’m amazed we’re both still ambulatory at this point,” groans Steven Patterson, one of the co-founders of Bridge Street Theatre.

Patterson and his partner John Sowle, who converted a once-derelict factory building in the Village of Catskill into an arts complex early in 2014 and have since transformed it into one of the most adventurous and exciting small theater companies in the Hudson Valley region, were hit hard when COVID-19 shut everything down in mid-March 2020.

“We’d just held a hugely successful benefit performance featuring Edmund Bagnell in February and were all set to launch into our full season when everything came crashing down,” says Sowle, the theatre’s Artistic and Managing Director. “As a space dedicated to live performance, the fact that suddenly no one was able to gather in groups pretty much froze us in our tracks. We’d initially hoped, of course, that things would return to ‘normal’ soon and that we’d be able to salvage at least some of the work we’d planned to present. But before too long it became fairly obvious that we were going to be in this for the long haul.”

But while the pandemic definitely slowed things down, it couldn’t stop them entirely. The pair hunkered down to try and figure out what the theatre could do to move forward – and to survive!

“John and I had been creating theatre together since 1986 and had a huge backlog of archival videos of productions we’d presented,” says Patterson. “We hauled those out, John edited and enhanced them as much as he was able, and we wound up posting as many of them as we could receive permission to post – which turned out to be 25 – free of charge on Vimeo. I did a series of Bedtime Story readings for kids, which we posted for free on YouTube. About midway through the year, we brought in two of the solo shows we’d originally hoped to present, filmed them live on our stage without an audience, and posted them online as ticketed events, sharing the proceeds with the artists. We also partnered with La Mama ETC in NYC for a livestream from our stage of Concrete Temple Theatre’s “Geppetto”, and with the Orlando-based steampunk horror troupe Phantasmagoria for a Halloween Weekend online presentation of their show “Plague Tales”.

As 2021 came in, and the situation remained unstable, the theatre was approached by Duke Dang of the Works and Process Series at Manhattan’s Guggenheim Museum about the possibility of hosting a series of bubble dance residencies. Utilizing Bridge Street’s artist housing, dancers were able to isolate and use the theatre’s mainstage and technical facilities to develop and rehearse new works. This program ran from January through June of 2021, hosting twelve different dance companies, and was so successful that it was re-instituted during the first few months of 2022.

As the pandemic began to ease somewhat, Bridge Street was able to re-instate occasional live performances, with a limited seating capacity to allow for social distancing and proof of vaccination and masking required for entry. One of the theatre’s most successful annual events, Bridge Street Belly Dance, made a triumphant two-performance return in June. Those performances were filmed and transformed by filmmaker JD Urban into a stunning concert documentary called “Before”, which has since screened to great acclaim at Bridge Street Theatre, Hudson Hall, and numerous film festivals. Jazz vocalist Charles Turner, composer Sean Mason, and playwright Marcus Scott brought a one-performance “tasting” of a new musical they’d been working on during a residency at Catskill’s Catwalk Institute to BST’s Mainstage in late July, and they’ve since returned to BST for a week-long residency (and performance) in February of 2022. During the summer, the theatre instituted a Youth Musical for local students and alumni, whose own performance opportunities had also been forestalled by the pandemic. A two-weekend run of “The Addams Family Musical: Quarantine Edition” was presented August 12 – 22.

And finally, with a nod from Actors’ Equity Association, Bridge Street was able to roar back to life with three of the productions they had originally hoped to present in 2020 – Fred Barton’s musical revue “Miss Gulch Returns!” (which took “Best Solo Performance” honors at the 2021 Berkshire Theatre Critics “Berkie” Awards), Samuel D. Hunter’s “Lewiston”, and Eugene O’Neill’s classic tragedy “Long Day’s Journey Into Night”.

The theatre is now proceeding with caution (but unbridled enthusiasm) with plans for its first full season since 2019. “This enforced pause, if you can call it a pause, definitely confirmed a number of things for us,” says Patterson. “It’s strengthened our already firm commitment to presenting new works – works that have a strong human connection and characters that audiences truly care about. Having to do more with less lately has re-affirmed our esthetic of making maximal imaginative use of our minimal means. It’s also demonstrated just how loyal our core audience in the region is and how much they want us to succeed. And we discovered reserves of strength I’m not sure we suspected we had. It’s been an exhausting, but exhilarating, couple of years.” 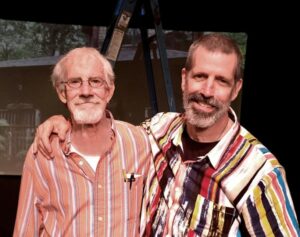 “We’d also be remiss if we didn’t give big thanks for the financial aid we’ve received during these tough times,” says Sowle. “Our patrons came through bigtime during our Fall Fundraising Appeal. EID loans, and grant monies from NYSCA and the Restart NY program, not to mention the grant monies we received for hosting the amazing artists’ residencies in our space, have been instrumental in helping us keep our heads above water. Sometimes literally – we actually had a couple inches of water flood the theatre at one point during 2021.”

Plans are now moving ahead for the theatre’s 2022 Season, which they’re calling (appropriately enough) “Celebrate Survival”. The five-play slate they’ve selected includes a regional premiere (Samuel D. Hunter’s “Clarkston”, which is the companion piece to last year’s critically acclaimed production of his “Lewiston’, opening on April 28 and playing through May 8), an East Coast premiere (Eric Pfeffinger’s unexpectedly hilarious “Fourteen Funerals” June 2-12), a commissioned world premiere (Brad Fraser’s “Shelley’s Shadow” September 8-18), a U.S. premiere (Hannah Moscovitch’s “Sexual Misconduct of the Middle Classes”, winner of the 2021 Canadian Governor General’s Award for English Language Drama, October 13-23), and an American classic – even if it is set in England (James Goldman’s “The Lion in Winter” November 10-20). They’ve also planned an exciting slate of imported theatre, readings, music, dance, and more, as well as another Student Musical production, for the summer months.

“We often say that when folks walk through the doors of our scrappy little theatre, it’s pretty much guaranteed they’re going to see work they’re unlikely to see anyplace else in the region,” says Sowle. “Want plays that’ll make you think and feel? This is the theatre you want to come to. We’re back, we’ve survived, and we’re so relieved. Hope you’ll all come share in the celebration.”

For more information on Bridge Street Theatre, winner of Best Theater/Performance Space for four consecutive years in the annual “Best of Greene County Awards”, as well as detailed information on their 2022 performance calendar, visit their website at BridgeStreetTheatre.org.