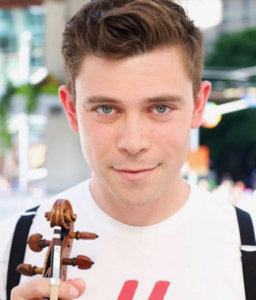 HE PLAYS THE VIOLIN starring Edmund Bagnell, 1st Violinist and vocalist of the internationally acclaimed group Well Strung, was developed by NEW WORKS PROVINCETOWN last fall and had its New York premiere at 54 Below on Nov. 25th.

Benefit tickets are $60, $50 for 2020 Season Subscribers. If you’re not already a subscriber, get your Season Pass HERE.

The performance will be followed by a lavish reception at the home of Edmund’s parents, Gil and Mary Ann Bagnell on Spring Street in Catskill.

Through stories and song, the evening celebrates all things music from classical to standards and from pop to Broadway, and of course with a good dose of fiddle thrown in. This piece shows a different side of Edmund Bagnell in this personal and uplifting journey through music.

HE PLAYS THE VIOLIN is supported by a generous donation from Duke Dang and Charles Rosen.

Edmund Bagnell played Tobias in the first national tour of Sweeney Todd directed by John Doyle. Recent credits include Rich in The Last Cyclist (Off Broadway), Toby in Gian Carlo Menotti’s The Medium (Off Broadway), Charlie Brown in You’re a Good Man, Charlie Brown (Summer Theater of New Canaan), Charlie in The Big Holiday Broadcast of 1959 written by Joanna Gleason (Fairfield Theater Company), and Oramel Howland in The Great Unknown written by Jim Wann (Pump Boys and Dinettes) and Bill Hauptman (Big River) as a part of NYMF.  Other Credits include, Tom Sawyer in Big River (STONC), Enoch Snow Jr. in Carousel(Barrington Stage Company), Stewart Smalls in Band Geeks (Ars Nova NYC), Huck Finn in The Adventures of (Cotton Hall Theater), and Dennis in Smoke on the Mountain (CHT).