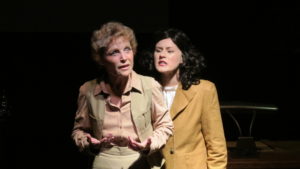 Though Sarah Greenman’s drama “Leni” is a dozen years old and considers events that began more than 80 years ago, it has immediate contemporary urgency and relevance.

The play, receiving an intellectually bracing, passionately acted production at Bridge Street Theatre, asks heady, important questions about artistic, moral and social responsibility through its exploration of the life and work of Leni Riefenstahl. Born in 1902 and a stage performer as a young adult coming of age in Germany between the world wars, she had moved into filmmaking by her early 30s, when her work caught the eye of Hitler. After his rise to power in 1933, he commissioned her to make documentaries, including of the Nazi’s 1934 rally in Nuremberg and the 1936 Summer Olympics in Berlin.

The resulting films, “Triumph of the Will” and “Olympia,” respectively, are considered masterpieces of cinematic art — and also some of the most effective propaganda tools ever made. Of the 133 filmmakers hired by the Nazis, Riefenstahl was the only woman and one of the few not to be a member of the Nazi Party, and she insisted until the end of her very long life — she died at 101 — that she was an artist, not a political figure; the uses to which her movies were put by the Nazis, and the galvanic effect they had on much of the German population, were not her fault or responsibility.

Or so she argued. And argue she does aplenty in the at-times-didactic “Leni,” which uses the conceit of two Riefenstahls, young and old, to shine a light on the many complicated and contradictory facets of an extraordinary artist who also did extraordinary damage.

“Is it my sin that Hitler admired my work?” asks Riefenstahl, later saying, of the 400 hours of Nuremberg footage and the 18 months of editing that produced “Triumph of the Will,” “Perfectionism is the only thing I have been guilty of.”

Under the astute, nuanced direction of John Sowle, who also designed the impressive lighting and evocative set, the two-character, one-act “Leni” moves fluidly through the years, pitting her younger self (Olivia Howell, very strong) against the older (Roxanne Fay, profoundly compelling) in scenes for a film about her life, in discussions with a never-seen Hitler and in some of the four postwar prosecutions Riefenstahl went through.

“I am on trial for creating the modern world,” says Riefenstahl, never modest about her achievements. “Western society has … stolen my work!” She cites Calvin Klein and Abercrombie & Fitch ads as mere commercial rip-offs of off the celebration of male beauty in “Olympia” and says George W. Bush’s 2003 landing on an aircraft carrier to declare “mission accomplished” in Iraq as little different than Hitler’s helicopter arrival at the Nuremberg rally as shown in “Triumph of the Will.”

How do you separate an artist from his or her work? Can you? Should you? Does intention matter, or is it superseded by interpretation if negative repercussions later sully the work and the artist’s reputation? What of Bill Cosby and Kevin Spacey? Both contributed importantly — and, in Cosby’s case, uniquely — through their work. Riefenstahl did not have an analog of their reprehensible private behavior, but she glorified even greater monsters.