The Lion in Winter by James Goldman. Directed by John Sowle.
Reviewed by J. Peter Bergman.

And every audience member thinks it knows this play. Well, surprise every audience member. This family dramedy has more downs and ups than you remember, at least in this new production at Bridge Street Theatre and you only have one week to see it. That’s a down all right. 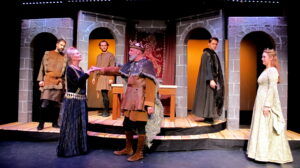 But the up is that when you see it you’ll find it’s more than you remember and that’s an up. Director John Sowle and his cast have found the small wonders in James Goldman’s script and shifted them from the back burners to the front of the stove. The cast has given the play heat and it is a unique flame that burns in Catskill, New York.

It is Christmas, 1183 and the English royal family has gathered at Chinon, France, part of Henry’s English kingdom. This family included Henry’s wife, Eleanor of Aquitaine, and his mistress, Alais, princess of France who is officially engaged to Richard, along with her brother Philip, King of France who has had an affair with Richard. Eleanor wants Richard to succeed his father but Henry prefers to honor John (both men did serve as English Kings – John was forced to sign the Magna Carta). This holiday is special as each brother formulates and activates his own plot against Henry. This is the history play that Shakespeare never wrote. It was too insidious for him to deal with, I’m sure.

The cast, in this case, makes the play work. Steven Patterson’s Henry is a moody man whose swings from harsh to gentle can be aggravating. You think you know where Henry is going but he changes emotional course and wrings your heart with his closed fist. It is a very dynamic, eclectic performance that threatens to eclipse the three sons. All of them, however, channel Henry’s dynamism, each in a very different way. Seth McNeill’s Richard the Lionheart lives up to his parents view of him. McNeill echoes Patterson’s changeability brilliantly. Orlando Grant’s John is a mewling and puking weakling who exhibits flashes of his brother’s bravado. Michael Raver’s Geoffrey is a conniver who is a master of manipulation who works his magic on both of his brothers, but to little effect ultimately. Then there is Alais who loves Henry, or does she, and loves Eleanor, or does she. Geneva Turner uses her loveliness to confuse and confound both King and Queen . . . and us as well. It’s a glorious performance.

Then there’s Leigh Strimbeck as the Queen. Her Eleanor is a middle-aged seductress who shows us how she got Henry in the first place and also how she lost him. Eleanor is the key to all that matters to these other characters and Strimbeck blatantly uses subtlety to expose her motives and her reason. It is a performance to cherish. Phillip is played by Christopher Joel Onken who brings out the gay characteristics of the man while preserving the solemnity of the young King.

Michelle Rogers’ costumes work very well for these characters and John Sowle’s design work is as good as his direction of the play. The original music by N. Jennings White is superb. The show ends its brief  run on November 20 so, get your tickets while you can and see this great, quizzical history, worthy of Shakespeare but written by an American.

The Lion in Winter plays at Bridge Street Theater, 44 West Bridge Street, Catskill, NY through November 20. For information and tickets call 518-943-3818 or go to: contact@BridgeSt.org.