GAY HISTORY FOR STRAIGHT PEOPLE! is a celebration of our big gay world, all of it, everything from GAY to Z, hosted by Leola, your favorite Kelly Clarkson-worshipping, senior citizen, redneck lesbian. Leola invites audiences to take her slightly arthritic & well-moisturized hand and skip through Leola’s interpretation of gay history. There will be jokes, store-bought snacks, prizes, and who knows – one lucky audience member may even win a gently used straight fella, based on availability. What a bargain! 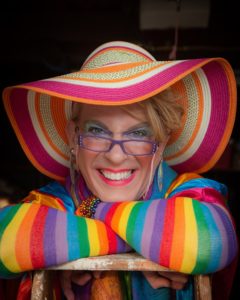 Written and performed by Will Nolan, GAY HISTORY FOR STRAIGHT PEOPLE! is an over-the-top, rainbow cladded sermon from Leola, who is on a mission to serve up some much-needed national group therapy, one audience at a time.

Nominated for a 2019 BroadwayWorld Cabaret Award and winner of the Long Island City Flying Solo Festival two years in a row, Leola has appeared across the country in a variety of fringe festivals, regional theaters, and middle-aged birthday parties doing her best to bring you entertainment that has been compared to Dame Edna’s hillbilly cousin giving a TED Talk.

The 2018 Atlanta Fringe Festival called Leola a “…touching performance,” and [a] “fantastic character with a great connection to the audience…. wildly hilarious, deeply intellectual and poignant.”

“As Leola herself proclaimed she is indeed ‘on a mission to heal this country one audience at a time,’ and in this mission, she completely succeeds. . .  (One has) the feeling of watching a finely tuned humorist with her finger on the pulse of right now, today now, and her tongue planted permanently in her cheek.”

WILL NOLAN (Creator) hails from Atlanta, but has been in the New York City area since 1994. A performer, writer and director, Will spent several years as the male half of the sketch comedy duo Naked Dog Walking, giving birth to Leola. Will continues to perform as part of the highly successful Mortified series in New York. He’s had pieces published and animated for Mortified, and filmed a pilot for Comedy Central.  Check out his animated monologue on YouTube. Besides writing for Naked Dog Walking and Mortified, Will has written numerous plays, including When the Mayonnaise Goes Bad with Stephen Kaplan. His plays have been produced throughout New York City. He is a husband and father living in Northern New Jersey, and is a proud member of the Dramatist Guild of America.

To learn more about Leola and her creator, Will Nolan, visit www.leolasladyland.com for more information, including recent reviews and upcoming shows.